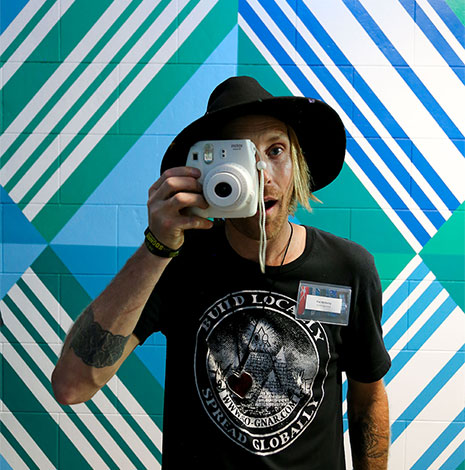 Pat is, above all, a creative collaborator. As well known for the large-scale murals he's created alongside some of the most prominent street and graffiti artists in the world as he is for the playful photo shoots and video parts he's participated in as a pro-snowboarder. Pat's vivid street art collaborations adorn the walls of dozens of boutiques, breweries, residences, bars, and other businesses in Denver, around the Rocky Mountains, across the country and around the globe. He's helped curate and create major art installation projects for brands including the Ford Motor Company, X Games, Budweiser, Zumiez, Loveland Ski Area, Wahoo Fish Tacos, and Pabst Blue Ribbon and has shared snowboard contest podiums with the likes of Shaun White and Travis Rice. Pat's also proud that the Snowboard Camp Tour he founded, which aims to make freestyle riding more accessible to kids, is now entering its second decade. Lastly, he's also the co-owner of So-Gnar, an umbrella collective responsible for the Snowboard Camp Tour, the So-Gnar streetwear and apparel line he helped design and the Shredded Beats hip-hop concert series. Pat is equally proud of his Minnesota roots and his 18 years of Colorado transplant status. Pat splits time between Denver and Golden and wherever his van full of snowboard gear and aerosol cans take him. Pat's dog Tora, a spirited West Highland Terrier, follows him just about everywhere.