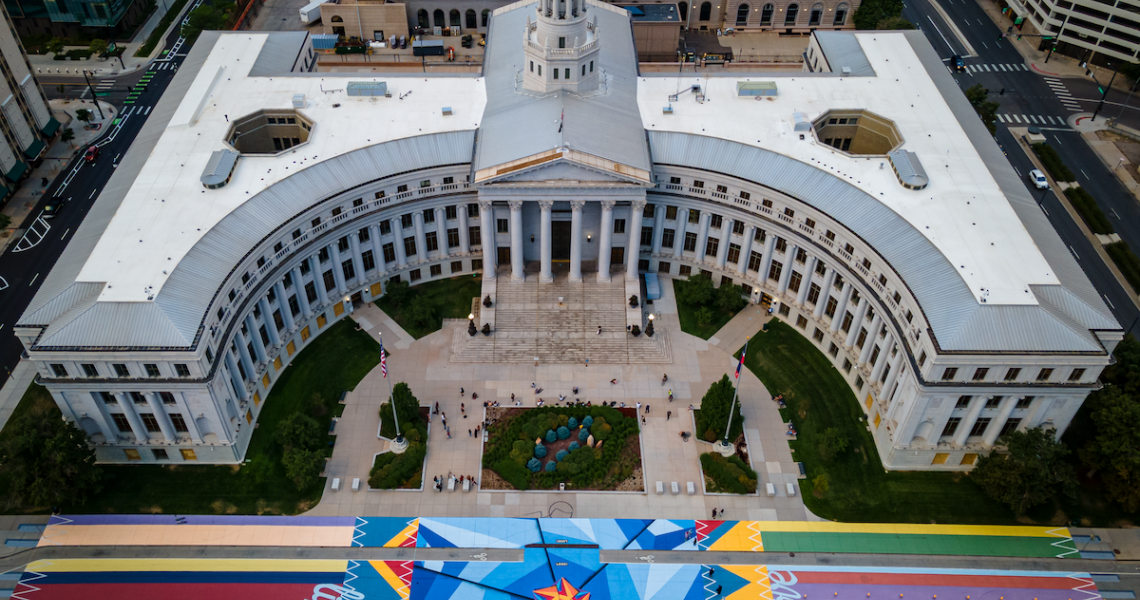 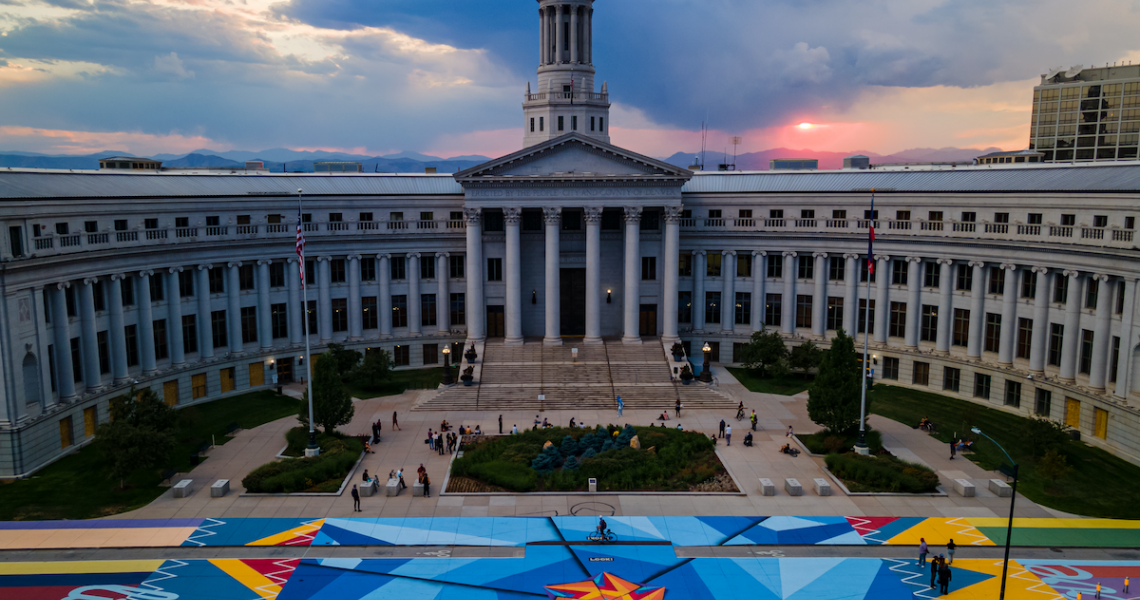 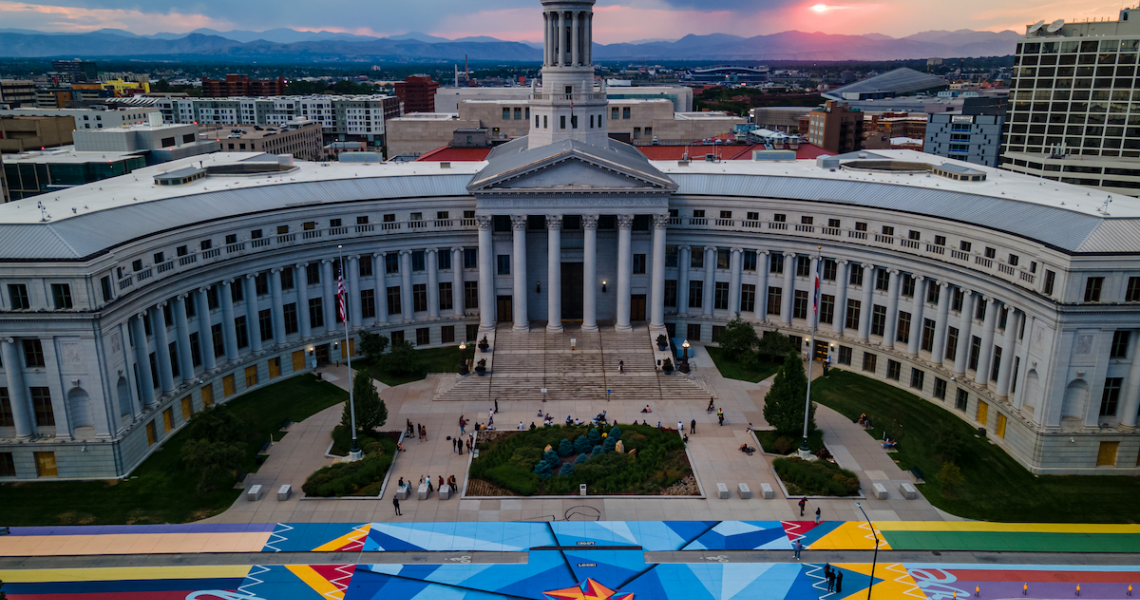 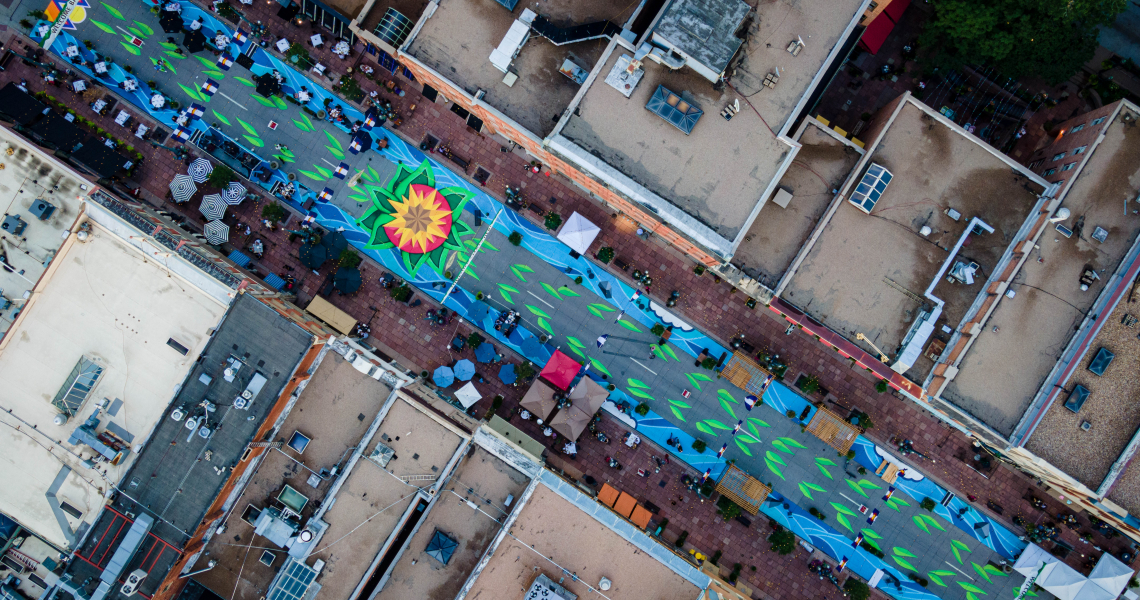 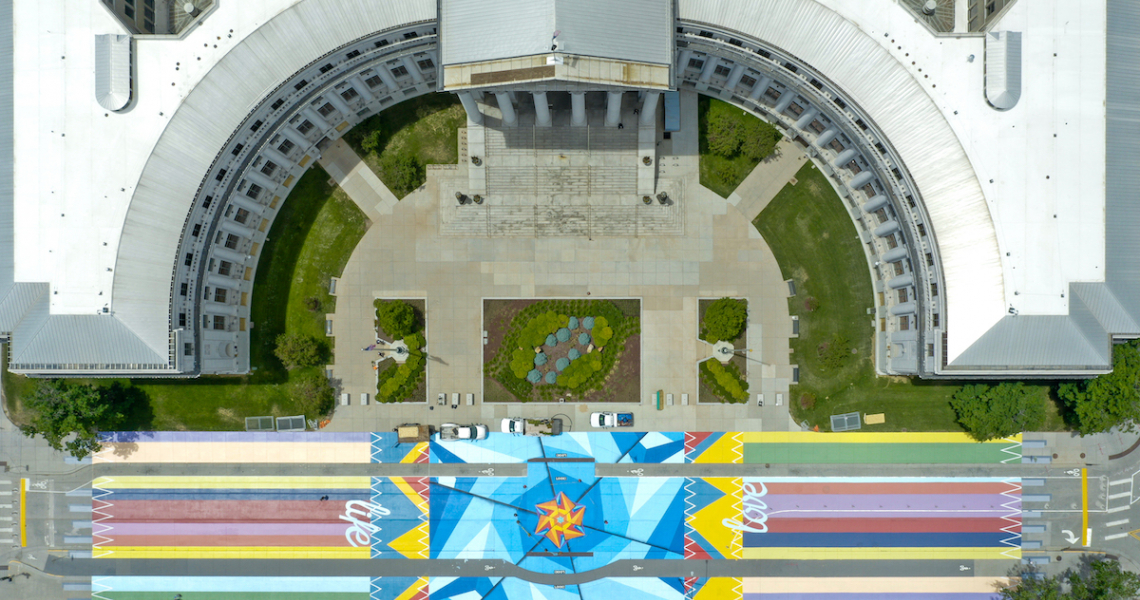 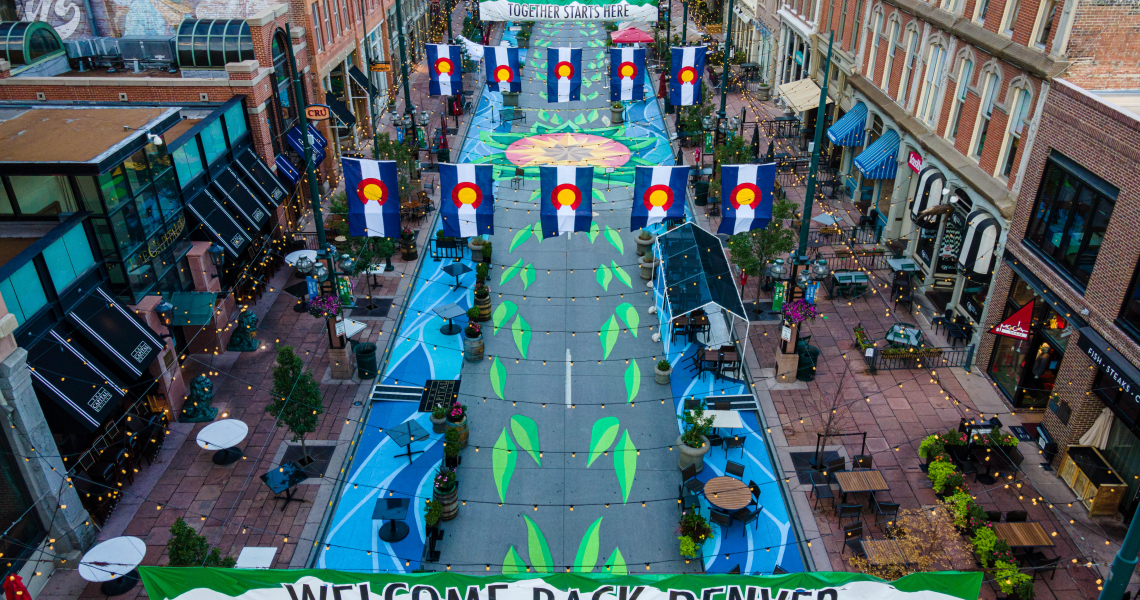 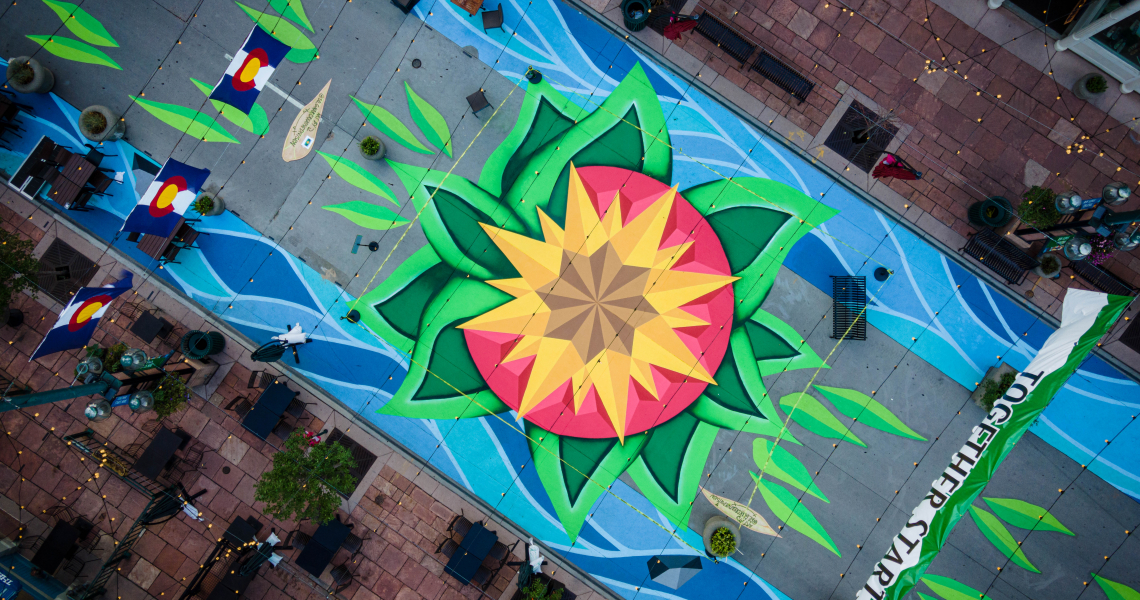 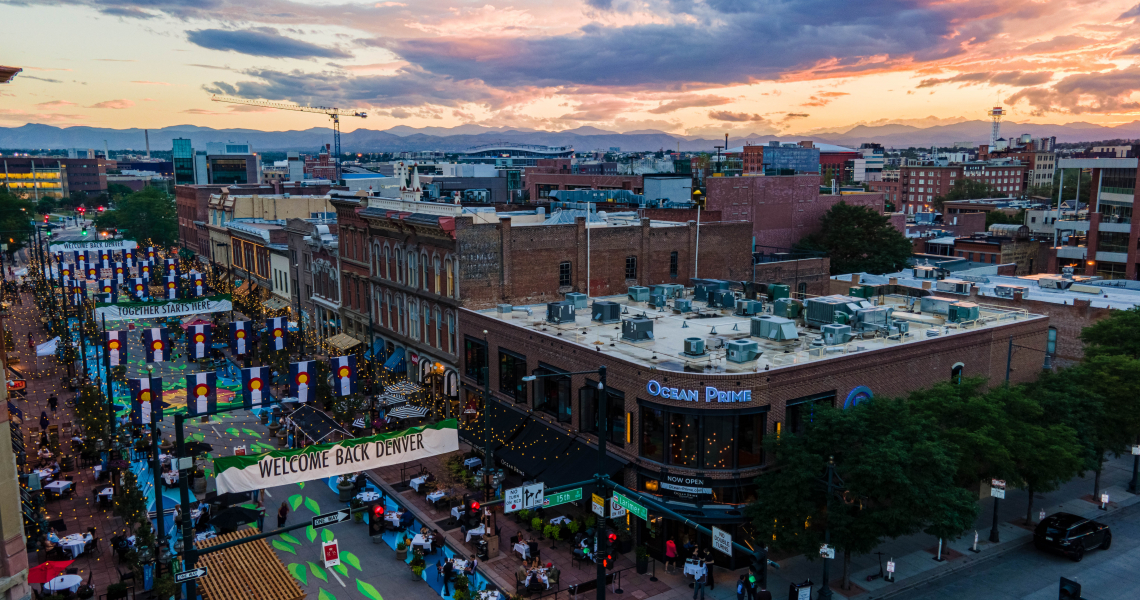 Over the past few months, the So-Gnar team (Pat Milbery, Josh Deitchman, Andres Delgado, Andre Rodriguez, and Andrew Brow) has been working on some more experimental murals at Larimer Square and Bannock Street in front of Civic Center Park in Downtown Denver. The word mural is rooted in the Latin murus, meaning walls, but these murals are painted directly on the street. Reminiscent of the chalk art festival, there is so much beauty in the use of such an unexpected canvas. The popularity of street murals is relatively recent and has expanded the art form even more. A Washington, D.C. street mural gained media attention in early June, becoming a catalyst for street murals beginning to pop up in nearly every city in the nation; a 2020 trend we can get behind!

The Bannock Street mural, titled ‘Interwoven,’ has been in the works for nearly a year. The goal was to create something representative of Colorado that would be iconically Denver, and that’s just what we did. The interpretive mountains and flag-inspired color palette make the piece feel just like the state we’re so lucky to call home, and the mural has turned the street into a magic carpet. The textile-like design and bright colors transformed the space into something that feels like magic; otherworldly. Every element of the design is intentional and well thought out. The center pinwheel is symbolic of a turn in a positive direction and the geometric shapes are representative of all the different cultures coming together in the city. The work on this mural forged some of the greatest friendships between artists and volunteers, making art such an evident aspect of human connection. ‘Interwoven’ is a celebration of bringing people together and strengthening community, and oh how beautiful it is to look at.

With the success of ‘Interwoven,’ the team was then approached by the Larimer Square group to brighten up the block of Larimer between 14th and 15th St. Larimer Square has been an iconic part of downtown for years and hosts a plethora of amazing retail stores and restaurants. With COVID forcing everyone to get a bit creative, the street was shut down to automobiles and allowed the businesses to create beautiful, socially-distanced patios and hangout spots. With the goal of making this a permanent change, what better way to create a welcoming energy than with another giant street mural?

The street mural at Larimer Square is graced with a stylized interpretation of the Colorado flag with a sunflower at its center. The braided blue streams on either side of the street are representative of snow runoff and the rivers running through Denver. The leaves serve as an intuitive walkway dispersed throughout the street just as they would be on a branch. The Colorado flags hanging at both ends of the street serve almost as bookends for the uniquely Colorado mural.

The presence of these murals has transformed their respective locations in almost redemptive ways. There is a noticeable shift in the number of people frequenting the areas, and the vibe is genuinely happy. Walking down the street you can hear laughter, the clinking of glasses, and every single child asking for sidewalk chalk. These murals have become meditative spaces that know no boundaries. Accessible to everyone and intended for community celebration, Larimer Square and Bannock Street have become fan favorites in the city. During a time of such isolation it’s so important to see the unity of so many people, and how incredible it is that a confluence of simple colors and patterns has the potential to bring celebration from mourning.

Art is a powerful tool for harmony.